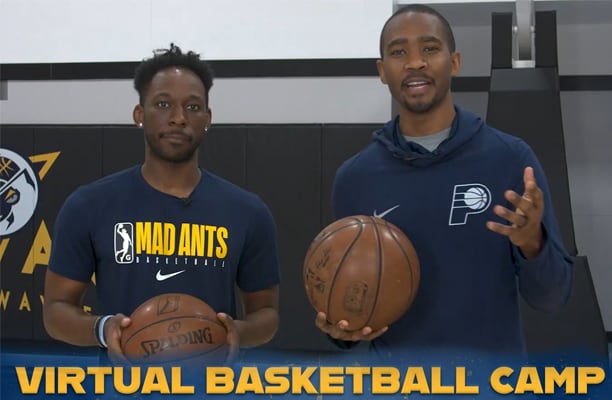 JULY 22, 2021 – The Fort Wayne Mad Ants, sponsored by Lutheran Health Network, have been recognized for having the top Youth Basketball program for the year across the entire NBA G League.

The honor was announced at the July 20 NBA G League Sales & Marketing meeting.

The Mad Ants competed against 25 other teams in the NBA G League earn the honor under the league’s social responsibility category in the annual awards.

All NBA G League teams were invited to submit a nomination with a committee of league and team executives choosing the winners. The Santa Cruz Warriors, Long Island Nets and Delaware Blue Coats won in other categories but the Mad Ants were the sole winner of the Youth Basketball Program honor.

As 2020 came to a close, the Mad Ants introduced their first Virtual Basketball Camp. The week long string of virtual training  was sponsored by Lutheran Health Network and OPS. This virtual presentation was led on screen by Mad Ant employees Nick Gamble and Ron Howard.

Gamble is a former standout at Fort Wayne’s Homestead High School and he went on to play at Davenport University in Grand Rapids, Michigan. Howard is well known to Mad Ants fans as Mr. Mad Ant. The only player in organization history to have his jersey retired by the team, Howard was the co-MVP of the NBA Developmental League (now G League) for the 2013-2014 season, where he became the leading scorer in league history. The Mad Ants won the league title in Howard’s MVP season.

The on screen duo ran viewers through a new skill each day for videos that ran simultaneously on Mad Ants social media, You Tube channel and ftwaynemadants.com