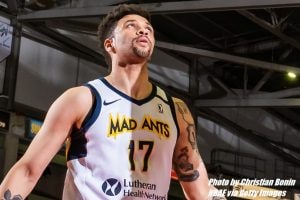 Hicks broke the record with a 26 foot shot at the 9:36 mark of the second quarter in Mississauga, Ontario, Canada. That three pointer, off a Daxter Miles Jr. assist, was Hicks’ 228th three pointer of his Mad Ants career.

The previous record was 227, set by Ramon Harris. Hicks tied that franchise mark earlier in the game, hitting a 25 foot shot at the 9:47 mark of the first quarter off a C.J. Wilcox assist.

Hicks had moved into second all time in three pointes on February 23 against Canton, passing Rod Wilmont.